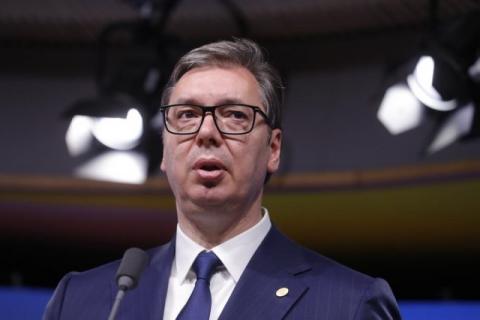 Aleksandar Vui addressed the media from Brussels.
"Today, Serbia gave great support to the opening of accession negotiations with North Macedonia and Albania. Again, nothing happened. This is necessary because both countries did everything. I want to thank everyone who supported our country. More than 20 leaders listened to us for several hours and I am also grateful to Macron for the initiative for a new political community. That is the only way for us to be heard, for our European colleagues to hear us. I am also grateful to Rama and Kovacevski for being fair to Serbia, they showed respect", said Aleksandar Vucic.
"In Croatia, they announced that Vui was being pressured because of Ukraine. I will not hide that I was among the last to speak and point out questions. I want to remind you of what happened in the last four months. Based on the information I received, 2.000 articles were published in the European media about Serbia and how Serbia threatens the entire region and peace in Bosnia-Herzegovina, Kosovo, but then nothing happened," Vucic explains.
He added that he is obliged to implement the recommendations of the National Security Council and protect the interests of our people.
After the address of the President of Serbia, questions from journalists followed.
Were there any more concrete decisions for the Western Balkans and what is the main message from Brussels for today?
"Everything I said here, I said openly and publicly in the presence of European Union officials, what was important to us. There were no concrete results, but it was a good discussion and I would never underestimate it. If you ask me if North Macedonia or Albania got a date, they didn't and Bosnia-Herzegovina didn't get a date. Many...