Vučić: They will get the answer VIDEO 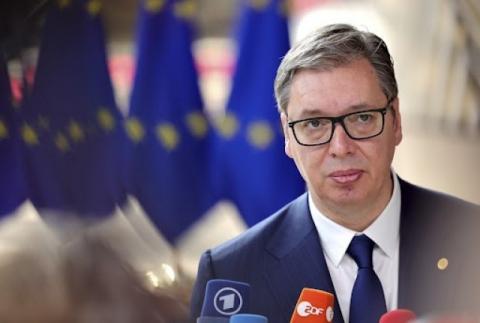 Before the beginning of the summit, President of Serbia, Aleksandar Vui, pointed out that there was no reason to be afraid for Serbia.
"These are stories for small children, there is no reason to be afraid."
Vui pointed out that he was grateful for the support of the EU, and that he did not expect anything special today.
"Gone are the days when independent and free states could be blackmailed. We came here to a friendly country. I believe in the European future of both Serbia and the region. Together with our friends from the region, we will fight for that European future, but respecting ourselves. Let's do it. The stories that we are scared and that Serbia is very small, and some are very big, leave it at that, these are stories for small children. North Macedonia is our brotherly country".
He said that he had talked with Macedonian Prime Minister Dimitar Kovacevski this morning, and when asked what he thought about the bilateralisation of the negotiation process, he pointed out that it had been done to Serbia with Pristina, by receiving Chapter 35.
"I cannot say that Kovacevski is happy. We will see what will happen," he added.
Asked by reporters whether he expected criticism for not imposing sanctions on Russia, Vucic clearly answered: "Expecting it or not, they'll get an answer".
Asked how he views the statements of Croatian officials that "Serbia can no longer sit on two chairs", the president said:
"Serbia is sitting on its own chair. And it is not Croatian prime minister and Croatian president who will lead Serbian politics, but the citizens of Serbia through their leadership. I congratulate them on wanting to lead Serbian politics, because it shows our importance and I wish them all the best".
When...