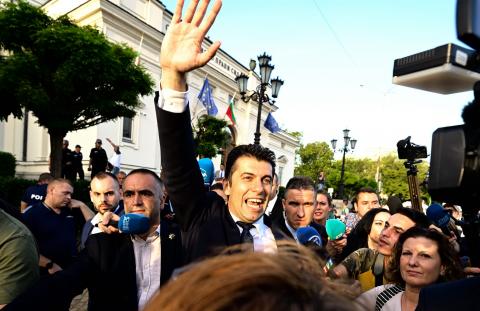 Regardless of how the dispute with neighbour North Macedonia ends - an issue that divided the coalition - the political confrontation will only deepen.

The competition that continued silently ever since the government was sworn in is now official. In a time of war, after a pandemic, it is also likely to bring more pro-Russian forces into parliament, according to the polls. The pro-European mainstream is facing its first proper test in years.

But the same competition will also give Bulgarian politicians a chance. They must convince the public that they come with fresh ideas - or are ready to stand up for old ones - in the challenging times of war in Ukraine, a looming energy crisis, high inflation and an EU enlargement conundrum.

Either that, or they face being punished by the voters for leading them into another election cycle they could deem needless.

A coalition of unlikely partners

Supporters of Bulgarian Prime Minister Kiril Petkov wave National and EU flags as they gather after the no confidence vote against government in front of Bulgarian parliament in Sofia, Bulgaria, 22 June 2022. Photo: EPA-EFE/VASSIL DONEV.

As Petkov was hypothesizing about his ousting, he was referring to Delyan Peevski, an MP from the Movement for Rights and Freedoms, DPS, placed last year under Magnitsky sanctions; former PM Borisov; TV show host Slavi Trifonov who heads the "There's Such a People", ITN; and Russian ambassador Elena Mitrofanova.

His "We Continue the Change" party, riding the wave of a pro-reform, anti-corruption sentiment in the last election, anchored its identity in fighting the vestiges of the flawed governance system inherited from the Borisov era and in resistance to the prevalence of...