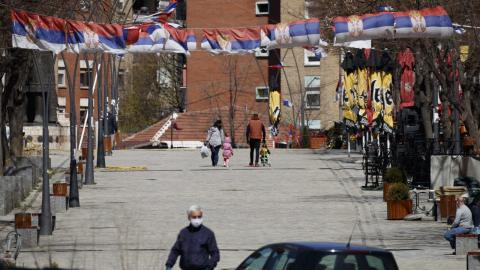 An explosive device was thrown on Thursday night at the electricity distribution facility in north Mitrovica, in the Serb-majority north of Kosovo, police confirmed.

"It is suspected that a hand explosive device caused the explosion at the electro-distributor," Mitrovica's Chief Prosecutor, Ismet Ujkani, told BIRN, adding that the attack was committed by "unknown individuals".

The explosion occurred on Thursday around 10:40pm. Media reported that most of the city had no electricity until the morning due to the attack.

The regional director of Kosovo Police in Mitrovica, Besim Hoti, told Kosovo media Koha that there were no reports of injured individuals. The police suspect the device was thrown on purpose

"There was a fire in the substation; at first it was believed it was due to the high voltage but after investigating it, it was clear that there was an attack," Hoti told Koha.

He added that several vehicles close to the electricity distribution facility had also been damaged.

Kosovo Public Broadcaster, Radio Television of Kosovo, RTK, reported that three criminal cases have been opened related to this incident.

The electricity distributor is managed by Elektrokosmet, a Serbian company operating within the Serbian state-run energy company, Elektroprivreda Srbije, which is not operating in accordance with Kosovo's legal framework.

Based on a June 21 agreement between Kosovo and Serbia, serving as a "road map" to implement the 2013 and 2015 energy agreements, the competencies of Electrokosmet will be given to the company Drustvo Elektrosever, another subsidiary in Kosovo of the Serbian state-run energy company.

Drustvo Elektrosever will obtain a licence from the Kosovo Energy...