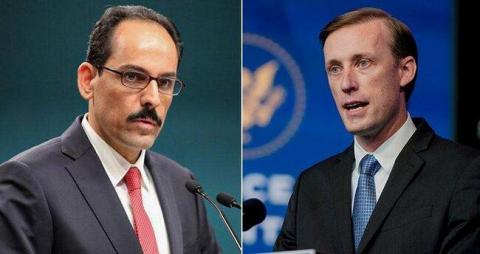 In addition to bilateral political and economic relations, the two officials discussed Türkiye's role in NATO and its contributions to the alliance, the NATO Madrid Summit, the application process of Sweden and Finland to NATO, grain shipments over the Black Sea and regional issues, according to a statement by the presidency.

They emphasized the key role of Türkiye in NATO and exchanged views on the new Strategic Concept of the alliance, the Ukraine war, the fight against terrorism, the food crisis and other security issues to be discussed at the Madrid Summit.

It was emphasized that the allies should be in complete harmony, unity and solidarity against common security and terrorist threats, the statement said.

Kalın conveyed that Sweden and Finland should meet Türkiye's expectations in the fight against terrorism and underlined that no progress can be made unless concrete steps are taken.

The spokesperson emphasized that it was unacceptable for PKK/PYD/YPG supporters to make the terrorist organization propaganda in Stockholm and through the media while Türkiye's negotiations with Sweden and Finland continue.

He noted that Türkiye continues its negotiations with Ukraine and Russia on establishing a safe corridor for grain shipments through the Black Sea and stressed that obtaining results from the negotiation process, in which the United Nations is included, is of strategic importance in terms of global food security.