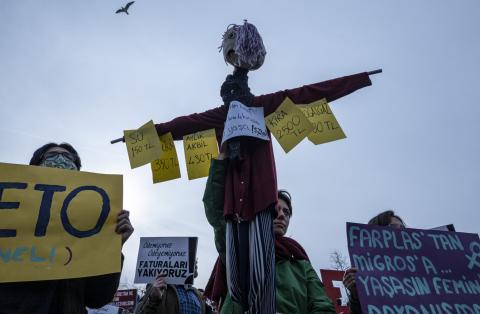 That policy also envisaged that goods and services produced in the country would become cheaper abroad because of the fall in wages. China entered its development process with a similar policy.

People exchange money at an exchange office in Istanbul, Turkey, 20 December 2021. The Turkish lira hit a new record low level of 17.94 liras to the US Dollar on 20 December. Photo: EPA-EFE/ERDEM SAHIN.

In my opinion, rather than expressing this economic policy with fancy sentences, the fact that the government is honest with its citizens about what we are facing works in the citizens' favour.

What I have written so far may sound confusing. On the one hand, the government is trying to reduce inflation, on the other, it is trying to increase exports, and on the other hand again, it has growth targets, etc.

It is trying to do all of these things in contradiction to the basic rules of the economy.

As is well known, interest rates are one of the biggest obsessions of President Erdogan. At a press conference in January, Nebati expressed this. "You will talk about the independence of the Central Bank, there is no such thing," he said. "Interest rates will no longer increase, forget it."

Afterward, he stated again that Turkey would no longer use this most effective tool in the battle against inflation.

Let's look at the inflation data, and explain the situation in Turkey in terms of price stability.

In May, Turkey's Consumer Price Index, CPI, was 73.5 per cent higher compared to the same month last year. The...

Pelosi: "China will not make a travel plan for us"