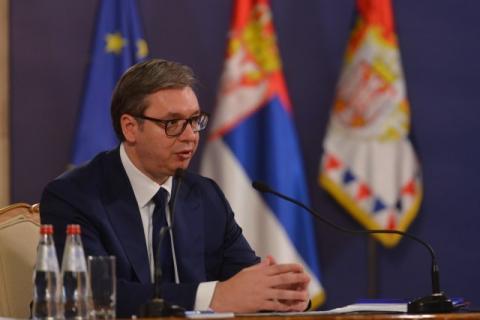 "As the war in Ukraine gained momentum, so the political and economic situation in the world is becoming more and more complicated, especially having in mind that Russia's forces are on the rise and that they are getting stronger. And all those who said that the war would be different, it is clear today that they are wrong, it brings different circumstances related to the economic situation in Europe and Serbia. That situation is more serious than the one we see," he said.
The President said that the situation was serious, and that in talks with the representatives of the EU and the countries of the region, they would find a solution for autumn and winter.
Vui pointed out that more and more newly infected people are abroad, and asked the citizens to spend a part of their summer vacation in Serbia, and provided the citizens with vouchers. Also, the president announced that he would receive the fourth dose of the vaccine. Vui also referred to the events from Brussels.
"It was not an easy position for me in Brussels. 16 presidents in Brussels said that we should align with the sanctions against Russia. Whoever thinks that it is easy to hear, listen - no. That is our job, but we should not go to the other extreme and think that we can find a replacement for EU markets or better partners and a better political path", he said.

After the speech, the president answered the questions of the journalists

Asked whether it was fair that Ukraine and Moldova were granted candidate status, President Vui said that Serbia received a cluster from the EU in December, and that it was not fair to expect that we would now get a date on negotiations with the EU.

"For example, we have come a long way from North Macedonia and Albania. I hope that...