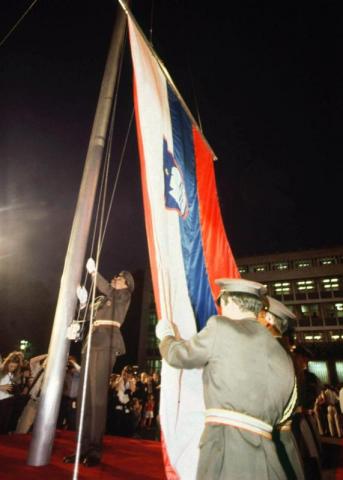 Ljubljana – On the occasion of the 31st anniversary of independence, Slovenia’s first President Milan Kučan and first Prime Minister Lojze Peterle said they would like to see more unity of the nation. They agree that this was the key to gaining independence, and that the idea of the common good should prevail in order to achieve common goals.

As Kučan told the press on the margins of a celebratory parliament session on Friday, on the eve of Statehood Day, the
memories of Slovenia gaining independence are becoming more and more beautiful over the years.

“Over the years, one does not only internalises all the anxiety and insecurity, and also joy, but also begins to understand them as something necessary,” he said.

Kučan, who served as the president of the republic in 1991-2002, sees the message of independence in the referendum decision of the Slovenian nation and the unity that Slovenian politics had won together with its citizens.

“When people feel that there is no unity between what people think and what politics does, big projects do not even start, let alone are concluded,” he added.

Kučan thinks that today it is not possible to achieve such unity as in 1991, and that the ideological perception of the past and “everything that divides Slovenians by force” is a bad prospect for the future.

He believes that all current politicians, the successors of his generation, have enough courage, but “some do not lack courage even for silly and wrong things”.

Sharing fond memories of the independence efforts is Lojze Peterle, who served as prime minister in 1990-1992, who said on the margins of the ceremony that “I continue to celebrate, because I know what it was about.”

He believes that the democratic transition in Slovenia still lacks a lot, and he would like to see politicians be able to stand together on essential issues, and that the fundamental direction of the state was not changed every two or four years.

Peterle thinks that more dialogue and more high political culture that would focus on respect, willingness to cooperate and understanding to well-intentioned criticism is required.

“After 31 years, the bottom line is that there are many successes that we can be proud of,” he nevertheless assessed.

Slovenia’s first prime minister believes that much remains to be done for the good of all in Slovenia. “And if the idea of the common good prevails, it will be even more beautiful here than it is now,” Peterle concluded.