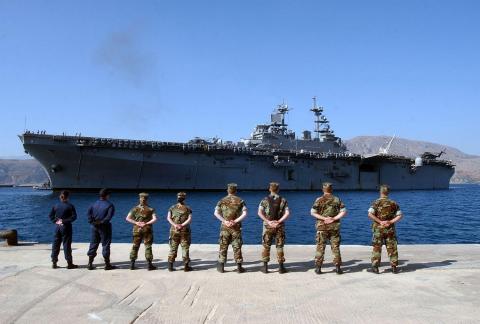 Greece has hit the button to actualize 13 military projects worth some 800 million euros, including the enlargement of a navy base in the Souda Bay of the island of Crete that will cost around 190 million euros.

New facilities will be constructed in the base, formally known as "Crete Naval Base," which is aimed to be enlarged to become a "harbor for half of the whole Greek navy forces."

Greek Defense Minister Nikolaos Panagiotopoulos received approval from the parliamentary armament commission for seven projects for the navy and six for the land forces.

According to the project, the government will allocate some 190 million euros for the enlargement works in Crete.

"The base in Crete's Souda Bay will be Greece's second-biggest base after the one in Salamina Island of Athens," the Greek army commanders told the Greek media.

Apart from the Souda base enlargement plan, Greece will spend some 250 million euros for the modernizations of S-70 Aegean Hawk-type helicopters and RM-70-type rocket launcher systems.

Greek media highlighted the base in Crete's Souda Bay came forefront after the Turkish seismic vessel "Oruç Reis" set sail in the eastern Mediterranean with the escort of the Turkish navy in 2020.

The Crete Naval Base was founded for the first time in 1872 during the Ottoman period. It features the only deep water port in Southern Europe and the Mediterranean Sea that is capable of maintaining the largest aircraft carriers.