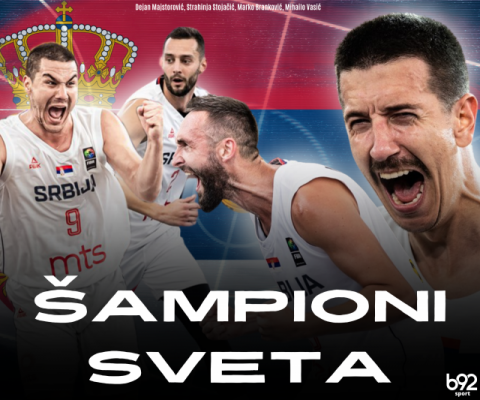 The national team of Serbia in 3×3 basketball won a gold medal tonight at the World Championship in Antwerp, as they were better than Lithuania in the final with 21:16.
Serbia managed to win the fifth gold at seven planetary shows, and it also has one silver and one fourth place.
Our team achieved seven victories from the same number of matches in this competition.
Serbia defeated New Zealand (21:19), Puerto Rico (21:19), France (22:15), Brazil (22: 7), Olympic champion Latvia (22:17), host Belgium (17:12), and finally Lithuania.
The "Eagles" did not allow a surprise against the selection of Lithuania, which has never played in the finals of such a big tournament.

Serbia opened the finals in a great way, with a series of 5: 0, kept the advantage from the beginning to the end and won the match with that difference in the end.
Serbia controlled the result from the beginning and soon reached a six-point advantage (7: 1).
Lithuania approached the three-point difference on several occasions, but Serbia then came to a certain advantage again.
The Lithuanians were the closest at the moment when the scoreboard read 13:10, but that rush of the rival was repulsed, and the victory was soon achieved. The most efficient in the ranks of the world champions was Strahinja Stojacic, who scored nine points. Mihailo Vasi scored five, Dejan Majstorovi scored four, while Marko Brankovi scored three.
Among the Lithuanians, Darius Tarvydas scored seven, Ignas Vajtkus five, while Gintautas Matulis and Marius Uzupis scored two each.