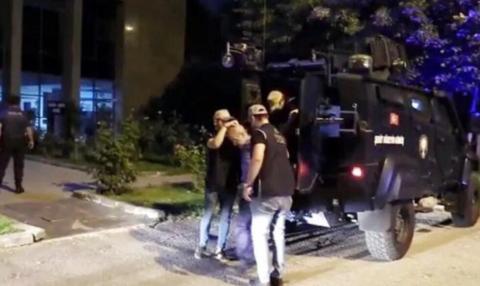 Mohammed Amar Ampara, arrested on June 26 with a charge of "working for Greek intelligence service EYP," has confessed all his espionage activities inside Türkiye in his testimony, Turkish private national broadcaster CNN Türk has alleged.

According to the TV station, the Greek spy gave all information of his three contacts in the EYP to Turkish officers.

The Turkish National Intelligence Organization (MİT) detained Ampara on June 25 and local media outlets published a photo of a man in his 50s or 60s in handcuffs.

According to Turkish sources, Ampara was involved in gathering information about the deployment of Turkish military border units, as well as information on Türkiye's Syrian population and Turks who fled to Greece after the 2016 coup attempt in Türkiye.

Ampara was operating disguised as a businessman during his trips to Türkiye, security sources said.

CNN Türk on June 27 announced that the Greek spy admitted all his activities inside Türkiye.

According to CNN Türk, he was born in Syria and a graduate of an agricultural faculty of a university in Syria.

Married with four children, Ampara went to Greece in 1986 to work in a marble factory with the help of his elder brother.

In time, "the Greek intelligence units contacted him" and asked him to "perform espionage in Türkiye," CNN Türk said.

According to the TV report, Ampara's wife is still in Syria, living in a region held by ISIL. Besides, she is "working in an educational institution run by ISIL."

What he was informing from the...