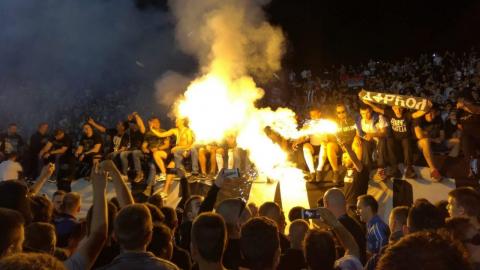 Football hooliganism is closely linked to politics, nationalism, violence and organized crime in the Western Balkans, a report says, with the highest links noted in Serbia and Bosnia and Herzegovina.

The report, by the Global Initiative Against Transnational Organized Crime, analyzed 122 football fan groups in the Western Balkans, identifying 78 hardcore ultra fans and 21 groups that engage in football hooliganism "and also have links to politics and/or organized crime".

"In establishing links between the ultras and organized crime in the WB6, the report examines why young people - predominantly men - join such groups," the report reads.

The report differentiates between ultras as "groups of hard core football fans affiliated to a particular team" and mere football hooligans "who engage in violence within the football milieu".

Groups in Serbia are of most concern, according to the report, due to the larger quantity and range of incidents, followed by Bosnia and Herzegovina. The situation in the rest of the Western Balkan countries is less bad.

The report cites one Serbian Partizan club fan explaining "some youngsters join ultras groups in the belief that membership is an opportunity to earn easy money selling drugs", adding that a youngster selling drugs might be provided with a scooter to "keep as a courier".

"For criminals embedded in ultras groups, teenagers are useful because they can sell drugs in cooperation with friends, they are eager to prove themselves and they are easy to manipulate," the report says, explaining also that, "as minors, they are treated more leniently by the legal justice system when they are caught".

By demonstrating loyalty, the youngsters might then be engaged in "selling harder drugs;...