Bulgarian Ambassador to the US: Assembly of the First F-16 Fighter for Bulgaria will Begin Soon 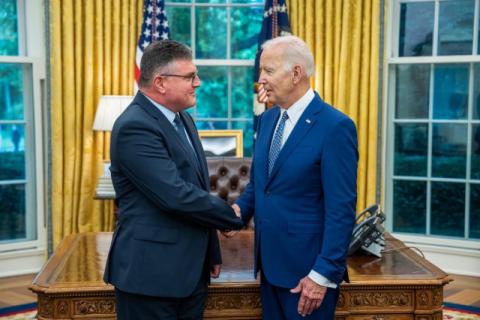 "Within a few days, the assembly of the first F-16 fighter for Bulgaria in America will begin". This was said to BNT by the new Bulgarian Ambassador to the USA Georgi Panayotov.

He added that there is still no reaction from overseas to the decision taken by the Bulgarian parliament last week in connection with the lifting of the veto for the membership of the Republic of North Macedonia in the EU.

"There can be no talk of pressure, for a decision, from the United States", said Ambassador Panayotov.

"There is no pressure, I have been here since May 19, I have had talks with the State Department, and more than once. I also met with lawmakers, with congressmen, last week. There is definitely no pressure, but yes, I emphasize, it is in the interest of the United States that there isn't a problem between Bulgaria and the Republic of North Macedonia, but there is no pressure," said Georgi Panayotov.