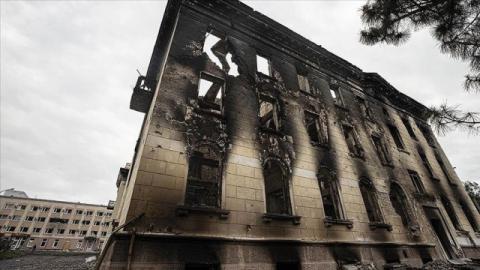 Russian missiles hit the Ukrainian capital Kyiv as G-7 leaders discussed new sanctions against Russia in Germany. To the east, the battle continued in the city of Lysychansk, the last major Ukrainian-controlled city in the Luhansk region.

Ukrainian President Volodymyr Zelensky, who will participate in the G7 summit today via video link, is expected to ask for more weapons from the West.

After a 3-week lull, Russian missiles hit the capital Kyiv again. The Ukrainian army reports that 6 long-range missiles have been fired by bombers from the Caspian Sea, 1,000 kilometers from the target. A multi-story building near a kindergarten was hit.

In his video address, Ukrainian President Volodymyr Zelensky said a 7-year-old girl had been injured and her father killed in a Russian attack. 5 more people were injured. Russia has denied hitting civilian targets.

"We need a powerful air defense - modern, fully effective, to protect ourselves from missiles. We talk to our partners about this every day. Delays in the transfer of weapons to our country, any restrictions, are in fact an invitation for Russia to strike again and again. The occupiers, these terrorists, must be beaten with all our might so that they do not think they can put pressure on us and outplay someone."

In the east, Russian media reported that pro-Russian separatist forces had already entered the city of Lysychansk.

The Ukrainian army admits that artillery was used in an attempt to...