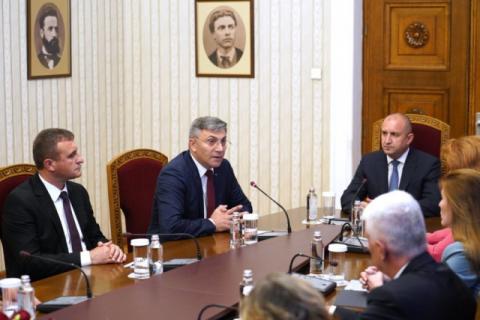 "We think we need to reach out to voters again. Let us enter the next parliament not with hatred, but with our values, goals and proposals for the priorities of the state," Mustafa Karadayi told President Rumen Radev.

Before the Movement of Rights and Freedoms (DPS) entered for consultations with the head of state, Karadayi commented the refusal to do so by "We Continue the Change" and the BSP.

"Disrespect for the country's constitution and institutions and refusal to engage in dialogue," Karadayi said.

After welcoming the DPS representatives, Rumen Radev described the moment as "challenging".

"I will not list all the crises, I will add only one - the political one," Radev said. He called on politicians not to allow Bulgaria to remain on the periphery of Europe. According to the head of state, "therefore, a more ambitious, unified and consistent foreign policy is needed".

"The responsible attitude of your movement towards ethnic peace is a fact, you have always called for dialogue. But Bulgaria expects equal efforts from all parties in the fight against corruption. Your party is aware of the high stakes of this challenge," Radev said.

"I expect responsible work from the 47th National Assembly. I hope the parties will enter into a constructive dialogue," the president said. However, Karadayi ruled out the possibility and said new elections were needed.

He said the fall of the government "is the natural end of a policy based on lies and hatred".

"The last coalition is not based on values ​​and policies, but on negation. Its whole activity was based on a lie. In the National Assembly,...