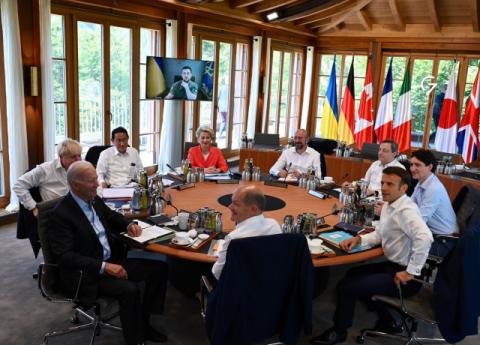 The G-7 countries have imposed a new package of sanctions against Russia. The measures are aimed at the military industry and military supply chains.

In addition, at the summit in the Bavarian castle of Ellmau, they agreed on a joint global initiative to reduce China's position in the third world. A $600 billion investment program has been adopted, mostly for African countries. This amount should help build infrastructure in the poorest countries over the next five years. The United States gives 200 billion for this, and the EU - 300 billion. Japan promised 65 billion.

The seven richest industrialized countries have not yet agreed to impose an upper limit on the price of Russian oil, but according to sources at the meeting, this is yet to happen.

He called on the G7 countries to do everything possible to end the war this year. "If the war continues during the winter months, then its end will be delayed for years", Zelensky said. He also called for even tougher sanctions against Russia.

The G7 countries have pledged to help Ukraine as much as needed.

"We will continue to provide humanitarian, financial and military assistance to Ukraine, as well as diplomatic efforts to end the war," the seven most developed countries said.

One of the topics of conversation was the famine in East Africa caused by Russia's blockade of Ukrainian grain for export.