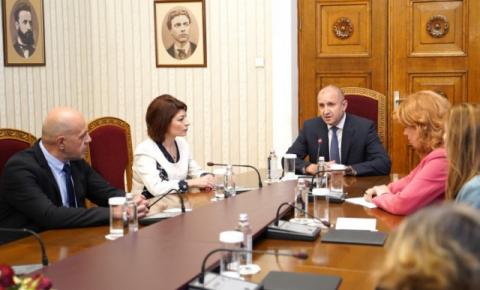 "This is a challenging moment for our country, we are facing a political crisis. The future of the citizens depends on the decisions of politicians. The deep crisis that engulfed us gave rise to the desire for change. The National Assembly must do a lot of work to ensure the functioning of the state at least until the end of the year. The budget update, the adoption of legislative changes to launch the Recovery and Sustainability Plan cannot be postponed, I hope the parties will enter into a constructive dialogue," Rumen Radev said.

"Political parties have a huge responsibility in times of crisis. If the government is not formed when the mandate of the first political force is handed over, and if the mandate is given to the GERB-SDS parliamentary group, we will return the mandate as soon as possible," said Desislava Atanasova from GERB.

According to her, in all crises, if the state does not have a guaranteed state budget, "it will be a catastrophe."

"Important laws are forthcoming, which we expect the Council of Ministers to submit to the National Assembly regarding the implementation of the Recovery and Sustainability Plan. All excuses that if it does not work, they will not be implemented, sound illogical. We will see and hear all the political opposition in the coming elections, but now is the time for adequate and state decisions", added Desislava Atanasova.

She called on the other parties to show common sense and work together.