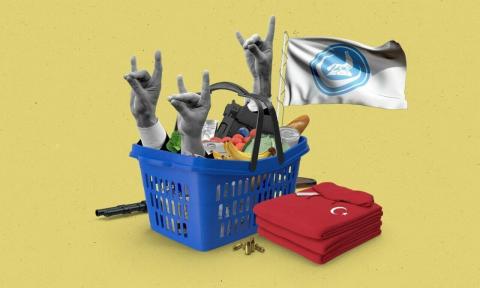 Cakalli is the founder of an informal Bosnian branch of a Turkish far-right group known as the Grey Wolves (Bozkurtlar), some of whose members support neo-fascist ideas. The Grey Wolves are officially called Idealist Hearths (Ulku Ocaklari) and their organisation is affiliated with the far-right Nationalist Movement Party, MHP, which is an ally of the Turkish ruling party.

Cakalli agreed to meet a BIRN journalist in the city of Sanliurfa, popularly known as Urfa, in the far south-east of Turkey, near the Syrian border. He used to study architecture in Bosnia, and after returning to his home country, he set up a company in Urfa, a city of two million people. Photos posted on his social media accounts emphasise three main topics - his marriage to a Bosniak woman, the Grey Wolves' activities in Bosnia and his closeness with the mayor of Urfa.

Searching through hundreds of photos on social media prior to the interview, BIRN managed to identify several members of the organisation and their activities.

BIRN's research showed that Cakalli started out in his mission to create a Grey Wolves branch in Bosnia by making contacts with members of the Party of Democratic Action, SDA, the main Bosniak nationalist party. The branch is now being run by younger people whose work he controls.

He maintains his political connections, however; he was among those who met the mayor of Sarajevo, SDA member Benjamina Karic, during her recent visit to Urfa.

Cakalli invited BIRN's journalist to talk in the local office of the MHP, the far-right party that has 47 MPs in the Turkish parliament and supports the ruling Justice and Development Party of President Recep Tayyip Erdogan. The small room on the third floor of the office where the...