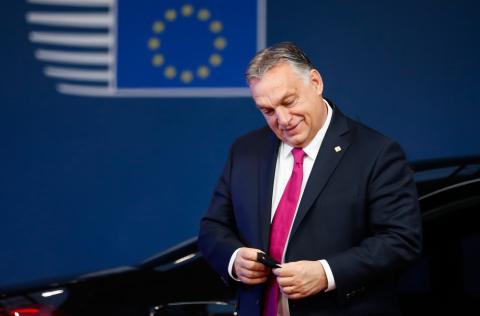 "Orban is intoxicated by his own success," sighs Istvan Szent-Ivanyi, a former Hungarian state secretary and ambassador, referring to the governing party's landslide election victory. "Frankly, given the current situation, I expect his rhetoric to get even sharper, with no signs of changing his pro-Russian and anti-EU line."

Many foreign policy experts in Budapest would agree with Szent-Ivanyi. Yet those closer to the government admit that Hungary's position is becoming increasingly uncomfortable and perhaps unsustainable. Foreign Minister Peter Szijjarto is no longer welcome in Warsaw and many other European capitals; the outgoing Hungarian president Janos Ader received a blunt "nie" when he asked Poland to be his farewell foreign visit; and German Chancellor Olaf Scholz takes the time to travel to the Western Balkans but a Budapest stopover is not on the itinerary.

It is telling that Orban's first official visit following his re-election was to Belgrade - a non-EU country led by a president, Aleksandar Vucic, whose own democratic and pro-EU credentials are in question.

"The government understands that the war in Ukraine has drastically reduced its room of manoeuvre. The war has made quite clear that there is no other option for us than the Western alliance," claims Anton Bendarzsevszkij, research director at conservative think tank the Danube Institute.

Bendarzsevszkij thinks a realignment with its Western partners would have been necessary anyway, but the war has made this all the more pressing. "But in politics, you can't change track from one day to another, it takes time," he tells BIRN.