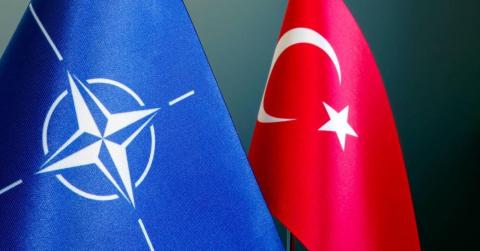 Presidential spokesperson İbrahim Kalın has said Türkiye, NATO, Sweden and Finland will hold a quadruple leaders' meeting on June 28 ahead of the NATO Summit in Madrid.

"Upon the request of the NATO Secretary-General [Jens Stoltenberg], a summit of Türkiye, NATO, Sweden and Finland will be held with the participation of our President [Recep Tayyip Erdoğan]. This summit will be on next Tuesday before the NATO summit," he said, speaking in a televised interview on June 26.

He and Deputy Foreign Minister Sedat Önal will pay an official visit to Brussels on June 27 for the third round of the talks as part of the decision taken during a phone call between Erdoğan and Stoltenberg, Kalın stated.

Türkiye's participation in this summit does not mean that Ankara would step back from its position, Kalın emphasized.

"We want Sweden and Finland to take a clear and unequivocal stance against organizations such as the PKK, PYD and YPG," he said.

The spokesperson cited his earlier meeting with the representatives of the two Nordic countries and said he conveyed the message that they give up the 200-century policy of neutrality, make a major paradigm shift and decide to join a military alliance.

"In order to achieve this harmony, you will have to make serious changes in both Sweden and Finland. The legislation will require amendments to the law and the constitution. We want you to show the same change against the PKK and its affiliated PYG, PYD and similar structures," Kalın told his interlocutors.

This is no more difficult or impossible than any other major paradigm shift, and Finland and Sweden say they will take some steps, Kalın said.

"We noted their commitments. There's a difference between making a commitment and taking...