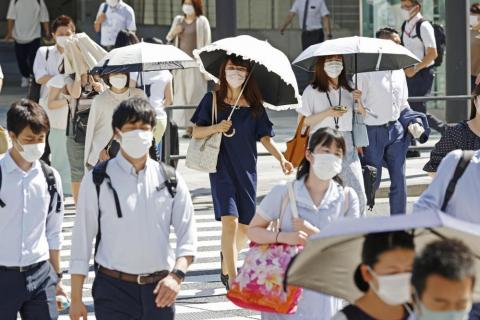 The economy and industry ministry urged people living in the region serviced by the Tokyo Electric Power Co. to conserve power in the afternoon, especially when demand peaks at 4-5 p.m.

Kaname Ogawa, director of electricity supply policy at the ministry, said electricity demand Monday was bigger than expected because the temperature is higher than Sunday's forecast.

"We are struck by unusual heat for the season," Ogawa said. "Please cooperate and save as much power as possible."

Ogawa, however, said people should use air conditioning appropriately and take precautions against heat stroke.

TEPCO is expecting contributions from the Tohoku Electric Power Co., which serves Japan's northern prefectures, to help ease the crunch.

The Japanese archipelago has seen record high temperatures for June in some areas. In Isezaki, north of Tokyo, the temperature rose to 40.2 Centigrade (104.4 Fahrenheit) on Saturday, the highest ever for June.

More than 250 people were taken to hospitals in Tokyo over the weekend for treatment of heat stroke, according to the Mainichi newspaper.

Power supply is relatively tight after Japan idled most of its nuclear reactors after 2011 meltdowns in Fukushima. It also has been closing down old coal plants to meet promises for reducing carbon emissions.

We have not threatened with a nuclear war