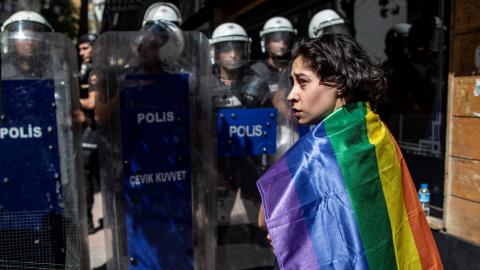 Hundreds of LGBT activists detained for taking part in a banned Istanbul Pride Parade on Sunday were released on Monday after a night in detention.

"Police interrogation of 373 people who were detained yesterday is now over, and they will be sent to hospital before being released," the organisers of Istanbul Pride Week said.

All events within the scope of the 30th Istanbul Pride Week were banned by district and city governors in Istanbul, citing threats to peace and security in the city.

However, this did not stop LGBT activists from marching in Istanbul's 20th Pride Parade.

Police blocked the roads heading to Istiklal Street and businesses were ordered to close.

AFP's senior photo reporter, Bulent Kilic, who followed the parade, was among the detainees, handcuffed by police behind his back.

📰 Police in Istanbul today, during #Pride2022 targeted the members of media again, as in previous years.

These grave press and media freedom violations must stop and journalists should be allowed to do their job!

"Today, Istanbul Pride was violently repressed by police who have arrested more than 200 people so far, and attacked journalists. We call for the immediate release of all those detained & investigation into use of excessive force by...