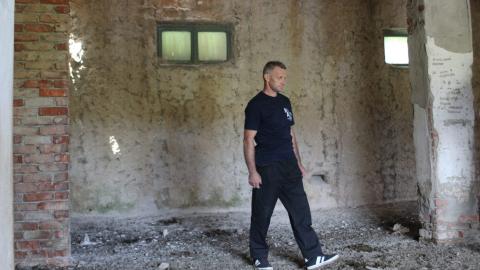 The 30th anniversary of crimes committed against Bosniaks by Bosnian Serb forces in the Kalinovik area was commemorated on Sunday by families of the victims and people who survived the killings in June 1992.

The participants walked what they called the 'route of death' between places where their relatives were last seen alive, where detention camps operated, where war crimes were committed and where mass graves were found.

Among them was Almir Hadzic, who was 16 when violence erupted in Kalinovik and witnessed how members of his family were taken away to detention camps in June 1992.

Hadzic's father Edhem was among 121 people who were killed. Families are still searching for bodies of 42 people who disappeared.

The remains of his father and some of his other relatives were found in a mass grave in Tuneli Miljevina in the Foca municipality, not far from Kalinovik, in 2004.

The Gunpowder Depot is not marked as a former wartime detention site and is now used as a stable for cattle, which victims' relatives said they consider insulting.

Inside the Gunpowder Depot in Kalinovik. Photo: BIRN.