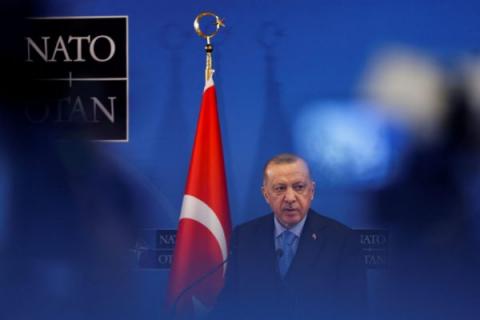 Turkish President Recep Tayyip Erdogan said that he will present documents at tomorrow's NATO summit regarding his claim that Sweden and Finland are harbouring "terrorists", which is why he has threatened to veto their accession.

Many analysts maintain that Ankara has been essentially blackmailing the Alliance with the threat of a veto in order to exact concessions from the US, which has blocked arms sales to Turkey (including 40 F-16 fighter jets). At the same time he is reportedly preparing to discuss the procurement of Eurofighter war planes from the UK.

Erdogan for now is underlining that he is not going to back off on his threat to veto the NATO membership applications of Sweden and Finland unless they extradite to Turkey members of the Kurdish PKK, the YPG (its Syrian branch) and of FETO (the organisation of his arch-enemy Fetullah Gulen, which he has also labelled a terrorist organisation as he alleges it was behind the 2016 abortive coup against him) and claims that the documents he will table at tomorrow's summit concern "confronting terrorism"

Over the last five years the two countries have rejected most of Ankara's extradition requests.

Erdogan has said that the two countries must cease their alleged "political, financial, and military support" for terrorist groups.

NATO Secretary General Jens Stoltenberg, Erdogan, and the leaders of Sweden and Finland are to hold four-ways talks before the start of the summit tomorrow in a bid to strike a deal.

US National Security Advisor Jake Sullivan said today that President Joe Biden "may well" meet with Erdogan on the margins of the summit as well.<...