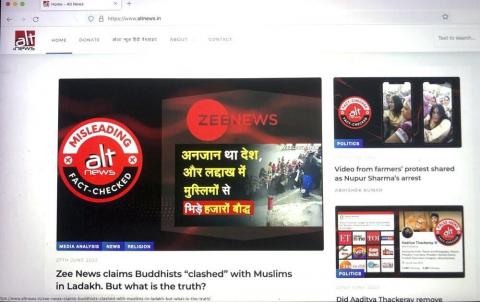 Police in India's capital New Delhi arrested a Muslim journalist Monday evening for allegedly hurting religious sentiments in what many have slammed as the latest example of shrinking press freedoms under Prime Minister Narendra Modi's government.

Mohammed Zubair, one of the co-founders of fact-checking website Alt News, was arrested over a tweet that police said deliberately insulted "the god of a particular religion." Senior police officer K P S Malhotra said the case was registered following a complaint from a Twitter user and Zubair was remanded in custody for one day.

Journalists across India have been increasingly targeted for their work in recent years. Some have been arrested under stringent criminal charges over posts on social media, where they routinely face threats and trolling. The Twitter accounts of some journalists and news websites have also been suspended on government orders.

The incident immediately set off a wave of outrage, with activists, journalists and opposition politicians taking to social media to decry it as harassment of the press while calling for Zubair's immediate release.

"In a democracy, where every individual possesses the right to exercise the freedom of speech and expression, it is unjustifiable that such stringent laws are being used as tools against journalists," said DIGIPUB, a network of Indian digital news organizations, in a statement.

"Arresting one voice of truth will only give rise to a thousand more," wrote opposition Congress leader Rahul Gandhi on Twitter.

Pratik Sinha, the other co-founder of Alt News, said that Zubair was arrested without any notice from police, which is mandatory under law for the sections under which he has been detained.