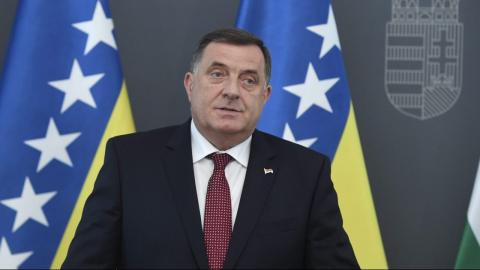 Bosnian Serb political leader Milorad Dodik told media after the Constitutional Court of Bosnia and Herzegovina ruled on Monday against the declaration by the Republika Srpska parliament that the entity "is going its own way and that it will continue to do what it thinks is best for it".

Dodik condemned the ruling as "completely outside the law and the constitution".

The Constitutional Court ruled against the Declaration on Constitutional Principles of Republika Srpska, which was adopted by the Serb-dominated entity's National Assembly in December last year.

The declaration says that control over judicial institutions, defence and security and indirect taxation should be returned to the entity from the state level.

The National Assembly decided that new entity-level legislation should be drafted within six months for consideration that would allow Republika Srpska to withdraw from the Bosnian Army, security services, indirect tax system and judiciary.

The declaration, which was backed by Dodik, who is the Serb member of Bosnia and Herzegovina's tripartite state presidency

as well as being Republika Srpska's most powerful politician, was seen by Western diplomats as a secessionist ploy. Dodik has repeatedly said that he sees no future for Republika Srpska in Bosnia and Herzegovina.

The National Assembly then voted to withdraw its consent for certain responsibilities to be transferred to the state-level High Judicial Prosecutorial Council, Bosnia and Herzegovina's judicial overseer.

The moves were a reaction to legislation to ban genocide denial that was imposed last summer by the country's top international official, High Representative Valentin Inzko, as his last act before he left office.