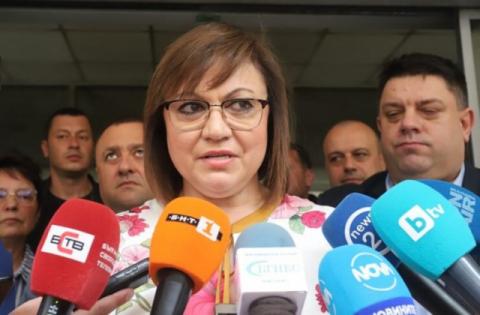 "In recent weeks, the issue of arms exports to Ukraine has been used harshly. An accusation has been made that we speak one thing in public and do another behind the scenes. And while we claimed that we did not export a single cartridge, they claimed that tons of weapons for billions of levs were sold at night with intermediaries".

This was stated by resigned Deputy Prime Minister and Minister of Economy Kornelia Ninova at a strange briefing at which journalists were not allowed to ask questions.

Today's "anger" of the leader of the Socialists was a publication a few days ago by the Secretary of the President Dimitar Stoyanov. In it, he showed part of a document stating that an arms shipment was being diverted from its final destination, the Islamic Republic of Afghanistan, to Ukraine.

Today Ninova showed the journalists sheets with large deleted passages, which she claimed were the whole text. According to her, this is a report from the already former director of VMZ Sopot to the Board of Directors of the plant for military production. Ninova clarified that this is a deal concluded in 2021 by the office of Rumen Radev with Prime Minister Stefan Yanev.

"The desire of the executive director of VMZ is to transfer the date and delivery from 2021 to April 29, 2022. And to transfer from Afghanistan to Ukraine," explained Ninova.

According to her, the management of VMZ approved the change of the final destination, but after she became Minister of Economy, the Interdepartmental Commission for Arms refused to consider this deal and did not issue a permit for it.