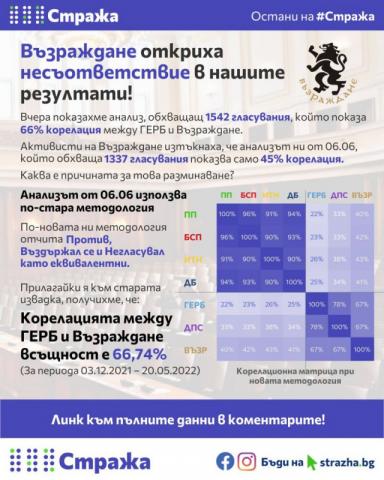 In 66.74% of the votes in the 47th National Assembly, the parliamentary group of "Vazrazhdane" was in unison with the PG of GERB, according to a report on the platform strazha.bg, which helps citizens to monitor more effectively the political processes in the country through open data visualizations.

The percentages in question are calculated on the basis of data for the period December 3, 2021 - May 20, 2022. On December 3 was the first meeting of parliament.

The reason for today's report is an objection of Vazrazhdane activists that the data differ from reality. Initially, they point to 45% of the same votes. It turns out that the activists are right. There is an overlap not in 45%, but in more cases.

"Yesterday, the reliability of our analyzes was questioned by Vazrazhdane activists, who (quite understandably) were not satisfied with the correlation between their party and GERB in the plenary vote," Strazha explained today. "Some tried to refute our analysis (covering the period up to 22 June) and therefore pointed to an earlier analysis (covering the period up to 20 May) in which the correlation was not 66% but only 45%. This change of 21%, in reality, cannot happen when the sample increases from 1337 to 1542. The reason for this discrepancy is that the two analyzes actually use different methodologies and we have not really made enough effort to explain the differences, for which we apologize".

"We see a coincidence between two parliamentary groups when the majority of one voted as the majority of the other. The possible values ​​of the votes are 'in favor', 'against', 'abstained' and 'did not vote'. The last three values ​​are functionally equivalent because they prevent the decision from being adopted, but...