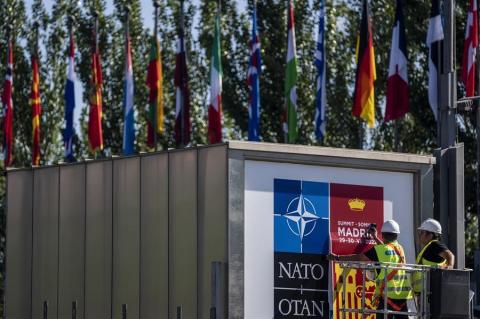 Turkish President Recep Tayyip Erdoğan said on June 28 he expected to see action instead of "empty words" from Sweden and Finland as they seek to appease Ankara's resistance to their NATO membership bids.

"We do not want empty words, we want results," Erdoğan told reporters before flying to Madrid for a NATO summit that will start with his meeting with the leaders of the two Nordic countries and the Western defense bloc.

Finnish and Swedish leaders will discuss their stalled NATO bids with Erdoğan.

But Ankara said the four-way meeting, which will also involve NATO chief Jens Stoltenberg, did not mean it was close to lifting objections to the two Nordic countries joining the military bloc.

Officials said Monday the leaders will meet in Madrid, in a last-ditch bid to break to deadlock that threatens to overshadow the NATO summit, which will focus on Russia's invasion of Ukraine.

Representatives from Ankara, Helsinki and Stockholm held a fresh round of talks on Monday at NATO's headquarters in Brussels to try to hammer out the differences.

"My strong hope is that this dialogue can be successfully concluded in the near future, ideally before the summit," said Swedish Prime Minister Magdalena Andersson after meeting Stoltenberg in Brussels.

Russia's invasion of Ukraine earlier this year saw the two Nordic countries abandon decades of military non-alignment by applying in May for NATO membership.

But the joint membership bid, initially believed to be a speedy process, has been delayed by objections from NATO member Türkiye.

The Turkish leader has also called on Sweden and Finland to lift arms...