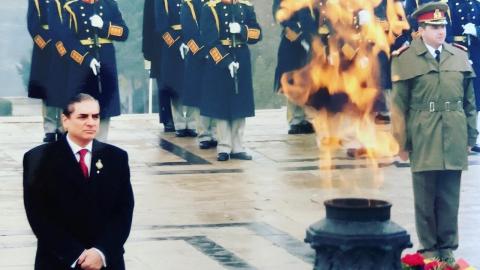 Prince Paul of Romania was held by police in Paris on Monday evening after fleeing Romania in the wake of his conviction for corrupt activities related to the illegal restitution of costly real estate near Bucharest.

"As a result of the international cooperation between the Romanian police and the French authorities, Paul of Romania was found in Paris. Procedural activities are still being carried out to hand him over to our country," said Romanian Interior Minister Lucian Bode.

The French authorities said that Prince Paul was found on the street, and during the verification of his identity, he presented a passport issued by the British authorities.

He is expected to appear in court in France soon and faces extradition to Romania.

In December 2020, the Brasov Court of Appeal convicted Prince Paul of buying influence and complicity in the crime of abuse of office against the public interest. He was sentenced to three years and four months in prison.

The court found that between 2006 and 2013, he illegally claimed land, including the Snagov Forest and the Baneasa Royal Farm, an exclusive area near Bucharest, to which he had no right of ownership.

Prince Paul has been on the run since December 2020 since police went to get him from his registered home address in Bucharest to serve his sentence. He wasn't there, and his wife, Princess Lia, told the officers that he had gone to Portugal.

Although he is known as Prince Paul or Prince Paul-Philippe of Romania, he is not recognised as a member of the House of Hohenzollern-Sigmaringen nor the Royal House of Romania. He is also known as...