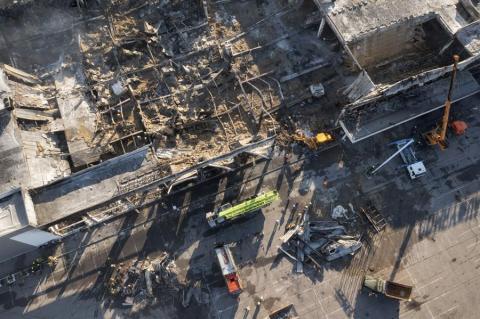 A Russian missile strike on a crowded mall in central Ukraine killed at least 18 people in what Group of Seven leaders branded "a war crime" at a meeting in Germany where they looked to step up sanctions on Moscow.

The leaders vowed that Russian President Vladimir Putin and those responsible would be held to account for Monday's strike in the city of Kremenchuk, carried out during the shopping mall's busiest hours.
"Indiscriminate attacks on innocent civilians constitute a war crime," they said in a statement condemning the "abominable attack."

Ukraine accused Russia of deliberately targeting civilians, with President Volodymyr Zelensky calling it "one of the most brazen terrorist acts in European history" in his evening broadcast posted on Telegram.
"A peaceful town, an ordinary shopping centre -- women, children ordinary civilians inside," said Zelensky, who earlier shared a video of the mall engulfed in flames with dozens of rescuers and a fire truck outside.
Dmytro Lunin, governor of the Poltava region where Kremenchuk is located, said Tuesday that 18 people were killed in the attack.

Fifty-nine were wounded, according to emergency services chief Sergiy Kruk.
"All response groups are working in intense mode," Kruk said. "The work will go on around the clock."
In a separate attack Monday, Russian rockets killed at least eight civilians as they were out collecting water in the eastern city of Lysychansk, said Lugansk region governor Sergiy Gaiday.
Lysychansk has become the focus of heavy Russian attacks following the fall of its twin city, Severodonetsk.
"Our defenders are holding the line, but the Russians are turning the city into rubble... the infrastructure is completely destroyed," Gaiday said on...