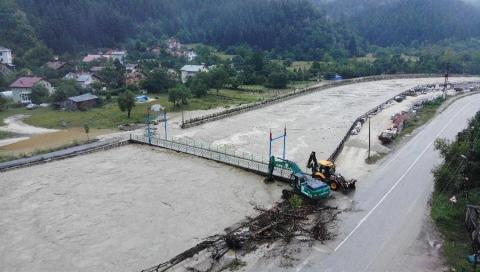 Heavy rains in northwest Türkiye caused rivers to overflow and bridges to collapse on June 27 as authorities worked to evacuate stranded locals.

Interior Minister Süleyman Soylu said there were no reports of deaths or missing people.

Türkiye's coast guard shared videos of a helicopter rescue, with an officer lifting a woman from the roof of her building in a village in Kastamonu province as the water rushed below them.

Türkiye's emergency and disaster authority AFAD said more than 2,550 personnel were deployed in six provinces affected by the rains and dozens had been evacuated. A meteorological "red alert" was declared.