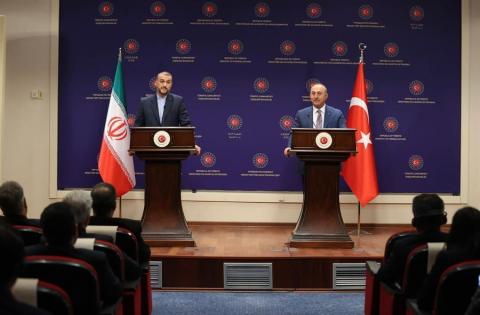 Iran's top diplomat has said Tehran understands Türkiye's security concerns stemming from northern Syria amid Ankara's vows over a new military incursion against the presence of the terrorist organizations.

"We understand Türkiye's security concerns in a very good way. We, at the same time, understand its statements about a special military operation [into northern Syria]," Iranian Foreign Minister Hossein Amir-Abdollahian told at a joint press conference with Turkish Foreign Minister Mevlüt Çavuşoğlu in Ankara.

Amir-Abdollahian paid a one-day visit to Türkiye on June 27 and held talks with Çavuşoğlu and President Recep Tayyip Erdoğan. Iranian foreign minister said he discussed the recent developments in Syria with Çavuşoğlu.

"We are of the belief that the security concerns of our Turkish friends should be eliminated as soon as possible and in a permanent way," he stated.

Iran, a staunch ally of the Assad regime, has always objected to military operations by Türkiye. It also has militia groups in different parts of the Syrian theater which support Damascus' fight against the moderate Syrian opposition.

For his part, Çavuşoğlu said terror is a common problem of all nations and therefore requires global and regional cooperation.

"Our cooperation in the fight against terrorism is important as two neighbors. We also shared our concrete expectations. We need to continue to work together on this issue as terrorism is the common enemy of all of us," he stated.

In the meantime, Erdoğan reiterated Ankara's determination to eliminate terrorist threats against Türkiye stemming from Iraq and Syria at a press conference following a routine cabinet meeting late on June 27.