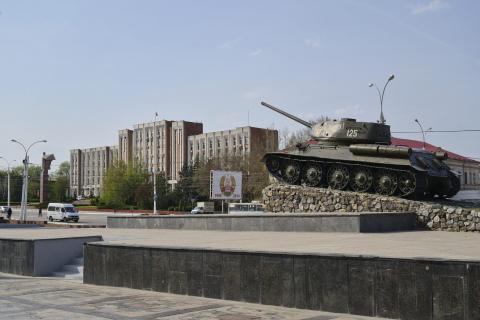 A few days after Russia invaded Ukraine in February, the Kyiv authorities closed all their border crossing points along the country's 400-kilometre boundary with the breakaway region of Transnistria.

Supply routes were disrupted and the prices of imported goods rose immediately.

"I haven't seen a single product which arrived without a 30 per cent price rise, as a minimum," said Elena, manager of a shop in Transnistria's main city, Tiraspol.

"Ukrainian goods used to fill a little over a half of the shelves," she explained. "Now, there's no Ukrainian beer, confectionery and almost the entire line of ketchups. I don't know what it's about. Perhaps the factories were bombed, or there were shipment issues. Before, it took 1,500 kilometres to deliver [food and other products], now it can take 3,000 or even 3,500. So all this affects the prices and hits customers in their pockets."

After the border point closures, access to the breakaway region was, for the first time, only possible through territories controlled by the Moldovan government.

"The changes are significant. Now, we [the state of Moldova] have full control over trade flow, travel, traffic and communications between the province and the rest of the world," Moldova's Deputy Prime Minister for Reintegration, Oleg Serebrian, said in April.

But the border closures have also sparked new tensions between Moldova and the breakaway authorities in Transnistria, a small, unrecognised territory with a population of just under half a million. Since its war with Moldovan government forces in 1992 after the collapse of the Soviet Union, Transnistria has remained in a state of 'frozen conflict'. It also hosts a Russian military presence that Moldova sees as a potential threat amid...