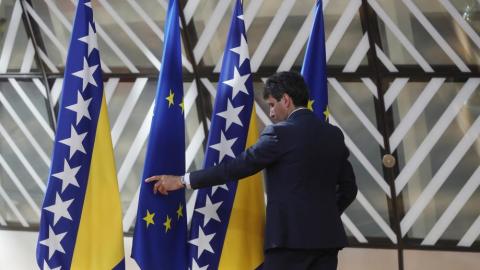 As a lecturer in Sarajevo, I sat through numerous MA thesis defences on Bosnia's European integration process. In the media, countless pundits and academics reinvented themselves as EU experts and made the lecture circuit, explaining the benefits of integration. I observed how even former communists who had once been part of a system that repressed human rights now talked up European integration and its liberal values.

In politics, both nationalists and social democrats took up the mantra of the EU. The pious and the secular likewise looked on the country's path to Brussels as a panacea. In a relatively small country, with a needlessly large number of political parties, I am hard-pressed to name a single anti-EU party. Politicians of various stripes toed the EU line to such an extent that Bosnia did not have an anti-EU constituency expressed in the form of a political organization.

The reason was simple. Having gone through war and multiple transitions, all Bosnians looked forward to a brighter future in the framework of the EU and NATO. These two distinct processes were lumped together as "Euro-Atlantic integration", with academics, journalists and politicians singing their praises. It was widely assumed that while NATO would provide security, the EU would boost the country's prosperity.

The mantra was that Bosnia just needed to fulfil the EU criteria and...