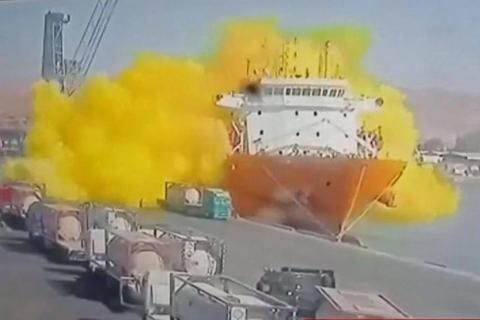 A chlorine gas explosion killed 12 people and injured more than 250 on Monday, authorities said, when a tank that fell from a crane released a poisonous yellow cloud at Jordan's Aqaba port.

Footage on state-owned Al-Mamlaka TV showed the large cylinder, said to have been carrying about 30 tonnes of gas, plunging from a crane on a moored vessel and violently releasing the chlorine gas cloud.

The force of the blast sent a truck rolling down the dock, while port workers ran for their lives.

"At exactly 15:15 this afternoon, a chlorine gas leak occurred in the port of Aqaba as a result of the fall and explosion of a tank containing this substance," the government's crisis cell said in a statement.

The death toll rose to 12 with 260 injured, both Jordanians and foreigners, it said, adding that almost half of the injured were being treated in hospitals.

Nearby areas were evacuated and residents told to stay indoors as emergency responders established a 500-metre (546 yards) cordon around the site of the incident, the crisis cell said.

The deputy chief of the Aqaba Region Ports Authority, Haj Hassan, told Al-Mamlaka that an "iron rope carrying a container containing a toxic substance broke," leading to the fall and leak.

The channel also cited the former head of the company that operates the port, Mohammed al-Mubaidin, as saying that a vessel had been waiting to load almost 20 containers of liquified gas "containing a very high percentage of chlorine".

He added that the gas is heavy and "it is not easy for its gas clouds to move... as it concentrates in one area and is affected by wind movement".