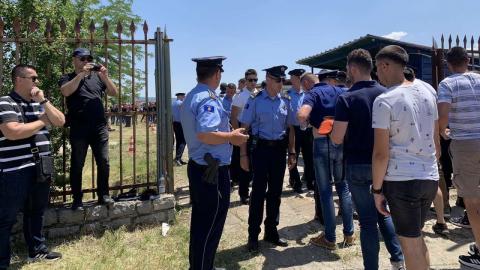 Kosovo police said they arrested Serbian citizen Nikola Nedeljkovic from Belgrade for "inciting hatred and discord" after a memorial service on Tuesday dedicated to the fighters of 1389 Battle of Kosovo.

The service was held at the Gazimestan monument near Kosovo's capital, Pristina. It coincides with the Serbian Orthodox religious holiday of Vidovdan (St. Vitus Day).

The police added that they stopped ten Montenegro citizens at the Vermice and Kula crossing points and found T-shirts they suspected to be offensive.

"During a check on their vehicles, police found T-shirts with inscriptions alleged to incite hatred," the police statement said.

According to photos that the police sent with the press release, the T-shirts had the slogan "Rejoice, Serbian people" ("Veseli se, srpski rode"), and drawings of map of Serbia including Kosovo and a picture of famous Montenegrin medieval poet Petar Petrovic Njegos.

Earlier on Tuesday, news website KosSev reported that a dozen policemen were stationed at the entrance to the Gazimestan monument, checking whether people were wearing T-shirts with potentially offensive ethnic slogans, such as "Kosovo is Serbia" or "Kosovo and Metohija", and that visitors' backpacks and bags were being searched.

Vidovdan (St. Vitus Day) is important for Serbs as it falls on the date when invading Ottoman forces defeated the medieval Serbian kingdom in the 1389 Battle of Kosovo, which led to the loss of Serbian independence for more than four centuries.