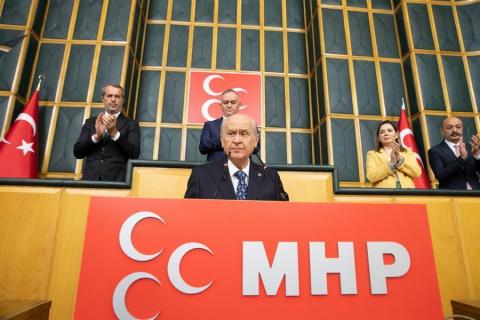 No legal problem stands before the presidential candidacy of President Recep Tayyip Erdoğan in the next elections, the leader of the Nationalist Movement Party (MHP) has said, vowing he will be reelected in the most strong way.

"The candidacy of Mr. Recep Tayyip Erdoğan is legitimate, legal and constitutional. [The opposition's] efforts are futile," MHP chairman Devlet Bahçeli said in his weekly address to his parliamentary group on June 28.

"Our president will be elected once again and in a most powerful way in 2023. It will be the People's Alliance that will construct the future of Türkiye," Bahçeli noted.

The opposition Nation Alliance claims that Erdoğan cannot run for the presidency for the third time as the constitution limits the presidential mandate to two terms.

Erdoğan was first elected as the president in 2014. He was reelected in 2018 after Türkiye shifted to the presidential system. The ruling Justice and Development Party (AKP) says Erdoğan's term between 2014 and 2018 does not count as it was under the old parliamentary system.

Recalling that less than a year is left for the presidential election, Bahçeli said that the People's Alliance will claim another victory. Responding to Felicity Party chair Temel Karamollaoğlu, who vowed that the opposition alliance will win the elections 99.9 percent in 2023, Bahçeli said: "I don't know whether to laugh or cry over this weird oracle. I wish happiness to Mr. Karamollaoğlu in his dream world."