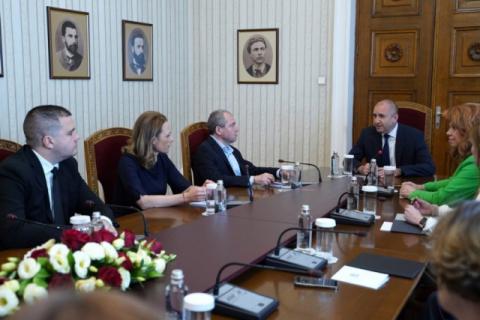 Consultations with President Rumen Radev to form a new government within this parliament continue today. The first meeting is with representatives of "There Is Such a People".

President Rumen Radev has said that resolving crises requires clear decisions from politicians in order to respond to people's growing concerns about prices and the war in Ukraine. He also expects an ambitious and consistent foreign policy in order to prevent Bulgaria from remaining on the periphery of the EU. "Tolerance in Bulgarian politics is very short", Radev said, noting TISP's consistent policy towards North Macedonia. "It takes time and effort to form a government, but also urgent action to pass the budget and important laws on which the Recovery and Sustainability Plan depends", Radev said.

The chairman of the parliamentary group of "There Is Such a People" Toshko Yordanov commented that it is satisfactory for them that the president acts responsibly - something that is not realized by some political parties. "Your role is extremely important, it is wonderful that you are clearly aware of it and do not hide. Thank you for appreciating the consistency".

He asked for the president's advisory board in January to be declassified to see which politicians are lying about North Macedonia.

"You decide, at that council things were not said that could threaten national security, but many lies were told", said Toshko Yordanov.

According to him, they are aware of the situation and will do everything in their power without crossing moral boundaries.

"I want everyone to be able to express their opinion freely, so far I have declassified a transcript of the Corporate Commercial Bank only after...