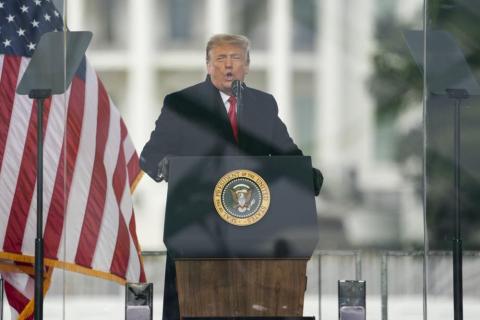 Donald Trump rebuffed his own security's warnings about armed protesters in the Jan. 6 rally crowd and made desperate attempts to join his supporters as they marched to the Capitol, according to dramatic new testimony Tuesday before the House committee investigating the 2021 insurrection.

Cassidy Hutchinson, a little-known former White House aide, described an angry, defiant president that day who was trying to let armed protesters avoid security screenings at a rally that morning to protest his 2020 election defeat and who later grabbed at the steering wheel of the presidential SUV when the Secret Service refused to let him go to the Capitol.

And when the events at the Capitol spiraled toward violence, with the crowd chanting to "Hang Mike Pence," she testified that Trump declined to intervene.

Hutchinson's explosive, moment-by-moment account of what was happening inside and outside the White House offered a vivid description of a president so unwilling to concede his 2020 election defeat to Joe Biden that he acted out in rage and refused to stop the siege at the Capitol. It painted a damning portrait of the chaos at the White House as those around the defeated president splintered into one faction supporting his false claims of voter fraud and another trying unsuccessfully to put an end to the violent attack.

Her testimony, at a surprise hearing announced just 24 hours earlier, was the sole focus at the hearing, the sixth by the committee this month. The account was particularly powerful because of her proximity to power, with Hutchinson describing what she witnessed first-hand and was told by...