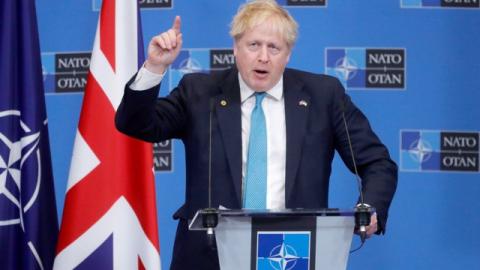 British Prime Minister Boris Johnson will call on his NATO allies at the Madrid summit to increase their defense spending in response to the Russian invasion of Ukraine, his cabinet said.

After Russia annexed Crimea in 2014, NATO member states pledged to spend at least 2.0% of their gross domestic product on defense by 2024 to ensure the alliance's combat readiness.

Only eight of NATO's 30 members have met or exceeded that target in 2021, but a number of countries, such as Germany and Italy, have increased their defense spending this year due to the war in Ukraine.

"We need allies - all allies - to make a serious effort to restore deterrence and ensure defense over the next decade," Johnson said in a speech at the NATO summit in Madrid today.

"The two percentages have always been designed as a lower limit, not a ceiling, and the Allies must continue to step up in this time of crisis," the British prime minister said in a statement.

During the flight to Madrid, the British Prime Minister said that a "NATO conversation" was needed for a new goal for defense investment after 2024.

NATO "needs to adapt to meet new and increased threats" with "long-term investment" and a willingness to "increase defense spending to adapt to crises and emergencies," the British government said in a statement.

At the summit, Johnson will announce that Britain will increase its military presence in Estonia, a small country bordering Russia with more powerful weapons and air defense.

However, Johnson has been criticized by the opposition...