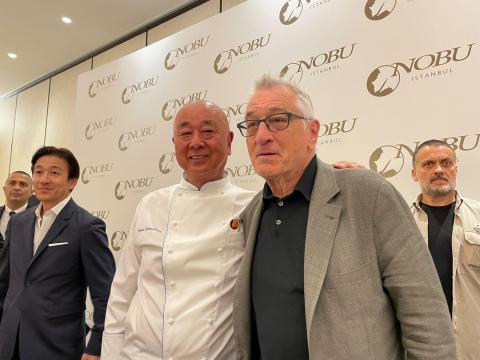 Famous Hollywood actor Robert De Niro, who came to Istanbul to make inspections at his restaurant Nobu, praised Türkiye's most populous province, saying that he would one day consider shooting a movie in the metropolis.

"For New York, some say 'There are millions of people here and millions of life stories to be shot on the silver screen.' It is the same for Istanbul."

However, the 78-year-old two-time Academy Awards winner set a condition, saying that "the script should be well-penned."

When asked if it was his first time in Istanbul, he remarked on his memories in the city two decades ago.

"I came here 20 years ago. Very interesting city connecting continents. It was huge. I remember taking a cab. We went and went, the roads did not seem to end," said de Niro with laughter and added: "While flying, I looked down from the plane. The city's got bigger."

Highlighting that he was amazed by the Grand Bazaar, he said: "I remember dining at a waterside restaurant where I ate delicious food."

Built in 1455, Grand Bazaar is one of Istanbul's largest and oldest covered bazaars with 61 streets and over 4,000 shops covering a total area of 31,000 square meters.

He opened the first Nobu restaurant, named after his business partner, the Japanese chef, in 1994. Now, there are 51 Nobu restaurants around the world, including two in Türkiye, one in Istanbul and the other in the Aegean tourism hub Bodrum.