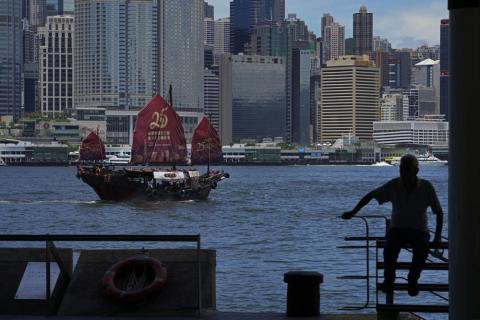 As the former British colony marks the 25th anniversary of its return to China, reeling from pandemic curbs that devastated business and a crackdown on its pro-democracy movement, Hong Kong leaders say it is time to transform again. They say the city should become a leader in technology that relies more on its ties with nearby Chinese factory cities than on global trade.

Chief Executive-elect John Lee's government is under pressure to generate new sources of economic growth, looking beyond COVID outbreaks and anti-virus controls that have devastated tourism and business and uncertainty about the legal climate after a crackdown on the city's pro-democracy movement.

In April, during his election campaign, Lee promised to "start a new chapter" for the city better known as one of Asia's busiest ports and biggest stock markets and "strengthen its competitiveness" in technology and innovation as well as trade and finance.

Lee gave no details but pointed to the Greater Bay Area, a Chinese government initiative to link Hong Kong with neighboring mainland cities including the technology and finance hub of Shenzhen and the manufacturing powerhouses of Dongguan and Foshan.

"There are great opportunities in the Greater Bay Area that haven't been realized yet," said David Graham, executive director of the British Chamber of Commerce in Hong Kong. "It is a big opportunity for Hong Kong, and it will be very hard to replicate in other cities like Singapore or Dubai."

Adding to the urgency for Lee to roll out a long-term...

Pelosi: "China will not make a travel plan for us"