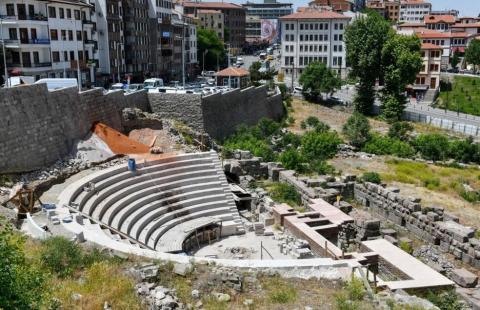 The archaeological park excavations, carried out by the Ankara Metropolitan Municipality, have unearthed many movable and non-movable Roman-era artifacts.

The region, where the Department of Cultural and Natural Heritage have found historical finds, will be turned into an Archeopark.

Emphasizing that the Archeopark Project is not a classical landscape design project, Bekir Ödemiş, head of the Department of Cultural and Natural Heritage of the Ankara Metropolitan Municipality, said:

"While our work continues within the framework of the 'Roman Theater and Archeopark Project,' very valuable finds regarding the early history of Ankara, especially the Roman Period, have been unearthed. The Archeopark work here will turn into a real archaeology park, beyond being a classical landscape design project. Scientific excavations will continue in the park. The exciting part is that most of the finds here today are not in scientific papers. In this way, we will contribute to science. We think it will be a seminal discovery for Ankara and Türkiye in terms of Anatolian history."

Within the framework of the excavations conducted around the cistern, a main building wall, which is thought to belong to the Roman period, has been unearthed.

Mehmet Emin Sancak, civil engineer of the Department of Cultural and Natural Heritage, underlined that with the discovery of the Roman-era building wall on the east-west axis, they will bring a quality work to the Archeopark within the framework of the project.

"The construction work continues on an area of 17,000 square meters. We continue the Archeopark excavations in conjunction with the Museum of Anatolian Civilizations. We found a Roman road and brick vaults here. Strengthening of the city wall,...