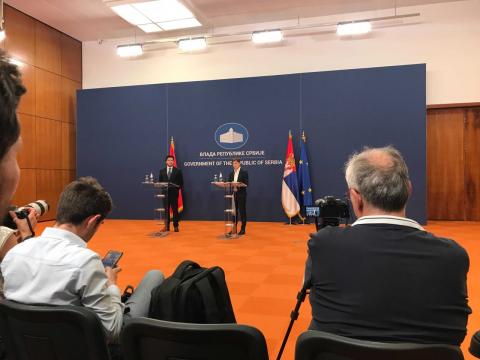 Serbian Prime Minister Ana Brnabic said that her Montenegrin counterpart, Dritan Abazovic, had "again drawn her attention" to the issue of the former President of the State Union of Serbia and Montenegro from 2003 to 2006 who is avoiding justice in Montenegro and hiding in Serbia, but gave no details.

"The competent authorities … of Serbia, are dealing with this question, so you will get an answer soon," Brnabic told a joint press conference in Belgrade.

At today's start of Abazovic's two-day visit to Serbia, according to their statements, he and Brnabic agreed on numerous economic and energy issues.

But the issue of Svetozar Marovic remains unsolved. Abazovic told the media he expected it to be solved but "cannot put pressure".

Marovic, once a close associate to Montenegro's President, Milo Djukanovic, has hidden from justice in Serbia since 2016, avoiding a three-years-and-nine-months jail sentence for corruption.

In August 2021 Abazovic, then Montenegro's Deputy Prime Minister, called on Serbia to extradite the fugitive ex-president, pointing out that his jail sentence expires under the statute of limitations in 2026, meaning he would be free in five years.

Part of his sentence, a one-year jail sentence awarded as a substitute for an unpaid million-euros fine, has already expired.

His son, Milos, also pleaded guilty to involvement in an illegal land sale in a village near Budva that prosecutors said cost the municipality 1.4 million euros. He was...