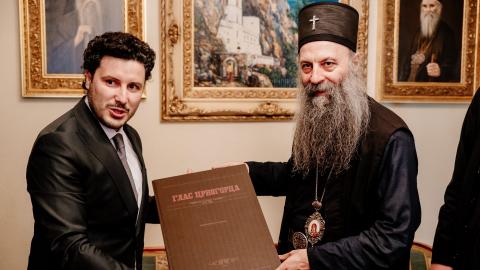 The largest ruling party, the Democratic Party of Socialists, DPS, and the Social Democratic Party, SDP, criticized the draft published on Tuesday as too favourable to the Church, the largest faith group in Montenegro.

But Abazovic said the draft agreement was presented to ruling party officials before it was published, and the DPS and SDP had made no comments on its content.

"Those parties had an opportunity to express their dissatisfaction with the draft. If they want to do something in accordance with their powers, the Prime Minister has nothing against it …. [but] this Government will close this issue," Abazovic told a press conference.

"While I am Prime Minister, only state interests will be my priority, not party interests," he added.

Montenegro has signed several "fundamental agreements" with smaller religious communities: with the Catholic Church in 2011, and with the Islamic and Jewish communities in 2012. But no agreement has been reached with the Serbian Orthodox Church, SPC.

According to the draft, the Serbian Church doesn't need government permission for relocating cultural heritage it owns, but must obey the Law of Cultural Heritage Protection.

The government is obliged to register all Orthodox churches and monasteries as belonging to the SPC and also start the restitution process of Church property nationalized or confiscated by the Communist authorities after World War Two.

According to the draft, the state cannot give building permission for Orthodox churches without the approval of the SPC, while Orthodox religious education can be regulated in...