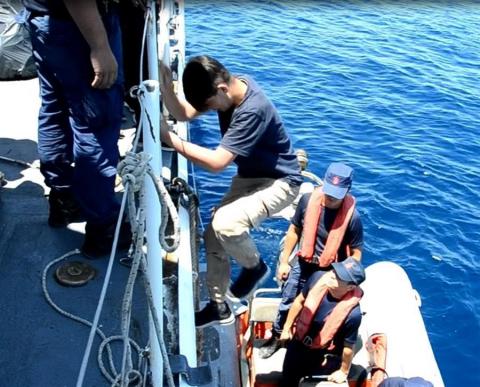 Turkish Coast Guard teams have saved a total of 186 irregular migrants that were pushed back to Turkish waters by Greece in two separate operations conducted in the İzmir and Muğla provinces.

Upon notifications that 154 irregular migrants have been pushed back to Turkish waters by Greece in the Karaburun, Dikili and Çeşme districts of İzmir province, Turkish Coast Guard teams helped the migrants get back on land on June 24 and 25.

They were sent to the Provincial Directorate of Migration Management after completing their procedures.

Meanwhile, two suspects who tried to escape illegally were apprehended off the coast of the Karaburun district.

During the second operation, 32 irregular migrants in life jackets have been rescued at around 02:30 off the coast of Datça in the Muğla province.

It was stated that the immigrants were pushed into Turkish territorial waters by the Greek forces.

Immigrants were then sent to the Provincial Directorate of Migration Management after completing their procedures.

Upon receiving notifications that there was a group of immigrants in a rubber boat at around 07:30 off the coast of Datça, Turkish Coast Guard teams have apprehended 29 illegal immigrants in the rubber boat.

Greece has pushed back a total of 41,523 irregular migrants to Turkish waters between 2020 and May 31, 2022, according to a report by Türkiye's Ombudsman Institution (KDK).

The report said that 53 irregular migrants in 2021 and 33 others in 2022 lost their lives - either drowned or froze to death - due to pushbacks.

"In some of the pushback incidents in the seas, irregular migrants were handcuffed from behind, were not given life jackets and thrown into the sea," the report said.