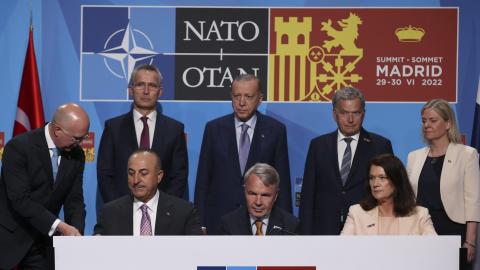 "We now have an agreement that paves the way for Finland and Sweden to join NATO," NATO General Secretary Jens Stoltenberg said late on Tuesday, thanking the Turkish, Finnish and Swedish leaders "for the constructive spirit that made this historic decision possible".

Finland and Sweden signed a trilateral memorandum with Turkey on Tuesday, pledging to address Ankara's concerns over their stance toward the outlawed Kurdistan Workers' Party, PKK and the followers of exiled Turkish preacher Fethullah Gulen, to pave the way for their NATO membership.

No press statement was issued after the signing ceremony in Spain.

"Finland and Sweden will not provide support to YPG/PYD [Turkey's name for Syrian Kurdish forces], and the organization described as 'FETO' in Turkey," the memorandum wrote.

The Nordic countries also pledged to lift all arms embargoes against Turkey and to establish joint security mechanisms.