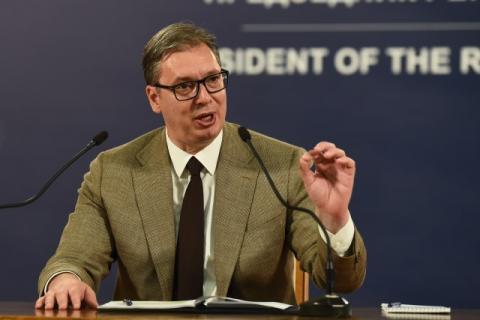 Those requests were brought to Belgrade by the EU special envoy Miroslav Lajcak, with whom Vucic met tonight in the building of the General Secretariat of the President of the Republic.
President of Serbia, Aleksandar Vui, said that as of today, we have a complete change in the situation in our country, as well as in the territory of Kosovo and Metohija.
President said that the situation in the Western Balkans had changed completely.
"We are always ready for dialogue, while some others have never been ready for a substantive conversation and have the support of Western powers," he said.
"They had the full support of Great Britain, Germany and the other Quint countries", Vucic said.
"They made two decisions in their temporary institutions. One is about banning ID cards from entering the province, and the other is a decision with the sole goal of expelling Serbs from the north, creating a new Storm, and campaigning for years to force Serbs to accept their license plates", he said.
"They have taken two decisions: one denying the right of entry with personal ID cards where they introduce papers to allow entry. The second decision is aimed at expelling the Serbs from the north of Kosovo, creating a new Storm where they want to convince the Serbs in the space of two months to register with RKS Albanian license plates. They will probably hand out leaflets, pamphlets, you know how it was done in the Second World War, and if they don't convince them, they will confiscate their license plates and vehicles", Vucic said.
The president says that the authorities of the false state are counting on the Serbs to leave the north, and that Serbia has been suffering lies from the West and Pristina for years.
"It's not my problem that...