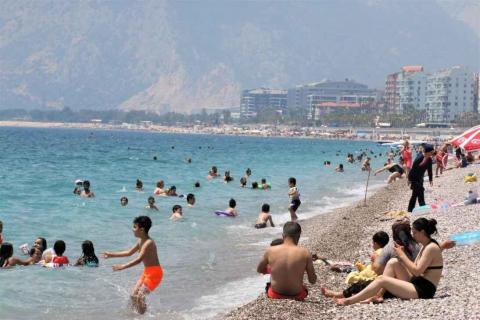 Heavy downpours and flurries will leave the country as of July 1, a prominent Turkish meteorologist has said while warning citizens to get ready to bear the brunt of blistering temperatures that will last at least a week.

"As of the weekend, the temperatures will reach life-threatening levels," Orhan Şen told the daily Milliyet on June 29.

According to Şen, there will be light freezing rain in Istanbul, but thunder-boomers in the mountainous provinces of the Mediterranean region and the Black Sea and the Central Anatolian provinces on June 30.

"By Friday [July 1], the weather in Istanbul will start getting warm, as in the rest of the country," he said. "Apart from the northeastern provinces, there won't be rain for a week in the country."

Residents have already been annoyed by the summer rains, but the meteorologist warned people to be cautious against the upcoming heat wave.

Stating that overtemperature is a calamity and people should take measures, Şen especially warned of extreme temperatures that will hit two regions the most.

"Citizens residing in the Aegean and the southeastern provinces should give ear to warnings."